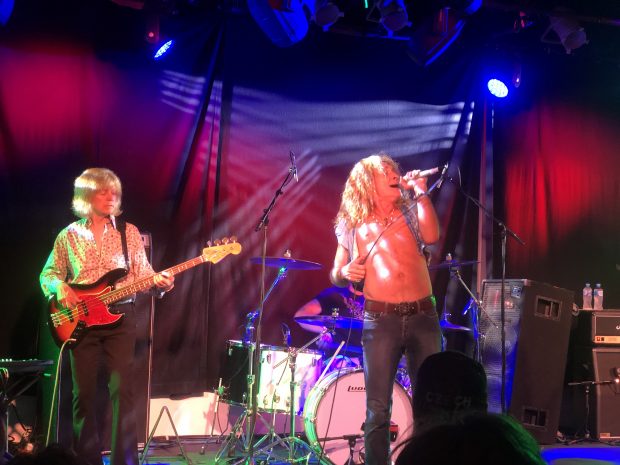 Seattle-based No Quarter are widely hailed as “the best Led Zeppelin band on the planet”. Band members take on the characters of John Bonham, John Paul Jones, Jimmy Page and Robert Plant and bring each of them to the stage in their absolute prime. This is more than a tribute act, NO QUARTER capture all of the subtle nuances and mannerisms of the characters they are representing just like actors in a film. Fans who have seen the original band thought they had returned and with the opportunity to relive the magic. Fans who never had the chance to witness the supergroup couldn’t believe their luck and finally got to experience the iconic and ground-breaking stage show for the first time.

The show was split into two sets and started with a blistering version of Rock and Roll  from Led Zeppelin IV before stepping back to the third album with Celebration Day. The couldn’t keep away from the fourth album though, and gave us another great version of Black Dog. Michael Anderson from New York really takes on the persona of Robert Plant and has the perfect voice for the role. A glitch mid-way through The Lemon Song, where we lost sound from one of the speakers, did not faze the group and they continued to the end of the song. Sound was restored for Good Time, Bad Times  but the crowd were Dazed and Confused  when sound disappeared from the rogue speaker again part way through the final song for the set.

The second set started off with ‘John Bonham’ having a break from the drums while the remaining members took their seats and ‘Jimmy Page’ (Bryan Christiansen) donned an acoustic guitar while bassist ‘John Paul Jones’ (Chad McMurray) took the mandolin – well I think it was; it sounded like a mandolin but looked like a shrunken guitar! – for Going to California. Christiansen retained the acoustic guitar for the catchy foot-tapping, hand-clapping Bron-Y-Aur Stomp.

Anderson introduced the next track saying his 19-year old son called him from Chicago to say it was snowing. He told his son he was away from “the land of the ice and snow” and the band launched into one of my favourite Zep songs Immigrant Song  from the third album. This was followed by an awesome version of Heartbreaker  from Led Zeppelin II, which was release 50 years ago last month (October 22 to be precise).

Christiansen wowed the crowd constantly throughout the evening with his guitar shredding ability. For the Wanton Song he even used a violin bow to portray his skills then Nathan Carroll showed his John Bonham impersonation in Moby Dick. ‘Page’ took to the double guitar for a sensational version of one of the greatest songs of all time: Stairway To Heaven. The crowd were more than happy to join in the final song of the set with the classic Whole Lotta Love.

After leaving the stage briefly, the band returned for the encore. Asking for suggestions from the crowd, ‘Robert Plant’ announced “I think we have a winner here” as they ended the night with Kashmir from Physical Graffiti which was one of the highlights of the show for me.

I have to agree with the critics that they are a brilliant Led Zeppelin tribute band and would gladly see them again. Keep an eye out for their return – hopefully!