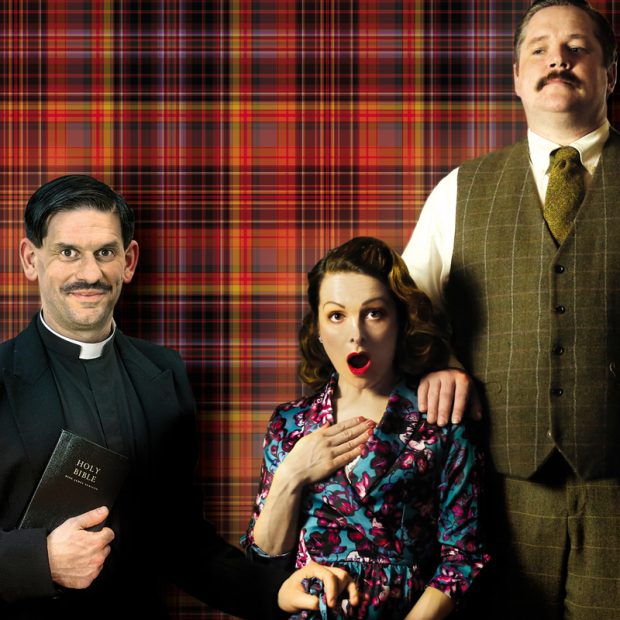 Tartuffe (pronounced tar-toof) is a classic from 1600s French playwright Moliere. This performance is a non-politically correct, rude and rhyming cut of the classic adapted by Scottish playwright Liz Lochhead and set in the 1940s. The show is performed in true Scottish dialect – being of Scottish descent I am quite OK with understanding the lingo, but was still grateful on many occasions for the large sub-titles displayed on the screen above the stage!

This is a hilarious story about Tartuffe, a religious imposter, who has conned his way into the household of Orgon and his lovely wife and sassy maid. He is set to marry their daughter but doesn’t hold back in showing his desire for the trophy wife! When she spills the beans to her husband, who confronts Tartuffe, the latter still manages to con Orgon who then accuses his family of conspiring to damage Tartuffe’s
impeccable reputation”!

His wife finally proves that she is the honest one and Tartuffe is the phoney – with some interesting and unexpected outcomes.

A great show and definitely well worth seeing – with only 5 shows left, hurry and book your tickets at this delightful venue (immediately behind the Hindmarsh Coopers soccer stadium). Allow plenty of time and grab a bite to eat and a drink before or after the show in the relaxing outdoor setting! There are many other great shows on at the Holden Street Theatres so check out what else is available and take in a couple of events.