If you just read my review of Ebony, you probably guessed that we waited half an hour and stayed for the Cirque Africa show. I was a bit worried that it was going to be more of the same but with different performers.

I was delighted to be proven wrong! Some acts were similar but predominantly it was an entirely different show. If you saw them last year or two years ago when they made their debut, then please see them again as they endeavour to put on an all-new show each year so the Adelaide fans will always have something to look forward to.

This is another rhythmic, colourful, energetic and awe-inspiring show with more incredible athletes. At first I did think it was going to be the same as Ebony as there was the customary pole in the middle, but their performance was different.

The second act was an amazing show of strength, flexibility and precision with two strong and lean young men – quite jaw-dropping stuff. The only duplication was the contortionist – the same one as Ebony, but we didn’t care – absolutely brilliant and could watch her performance time and time again.

The action never stops with these performers having an absolute ball and drawing the crowd in with the smiles, skills and energy. There were numerous displays of balance and strength with acrobatics on top of a stack of about a dozen chairs, stacking and balancing on boards which were piled on balls and rollers stacked in opposite directions (hard to explain but I hope you get the picture!) and human pyramids.

A mind-blowing show – mostly different to Ebony – and easy to see why it has been one fo the most popular shows at The Fringe for the past couple of years and with sell-out crowds. 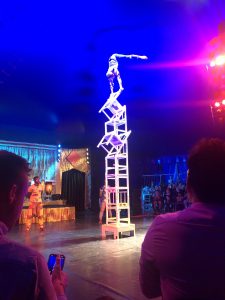