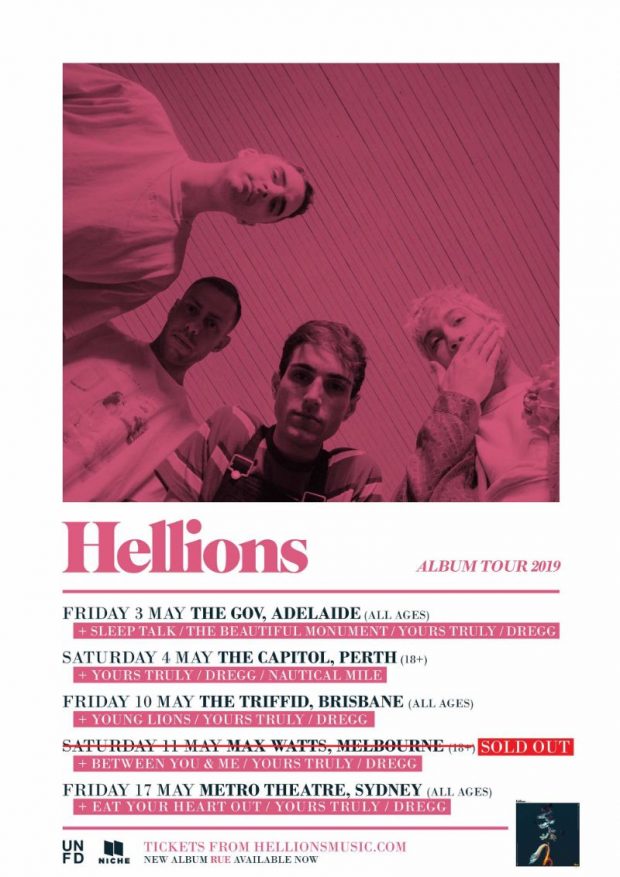 Touring in May – Hellions

Aussie rockers Hellions are getting ready to take over cities across Australia for their biggest string of headline shows to date. Melburnians have been quickest off the mark, snapping up tickets to the now sold-out show. Tickets to all remaining shows are selling fast.

The four-piece rock outfit have rounded off their already stacked line-up of local support with the addition of Newcastle natives Eat Your Heart Out in Sydney. Since emerging in 2012 Eat Your Heart Out have established their very own brand of grunge-y emo energy, combining punk power with pop palatability to create a concoction that has ignited excitement around the world. With 3 EPs under their belt, the quintet have been well-armed with plenty of ammo to perform with the likes of Simple Plan, Sum 41, Columbus, Trophy Eyes and now… Hellions!

Eat Your Heart Out have joined an explosive roster of handpicked local support with Yours Truly and Dregg leading the charge nationally, plus Sleep Talk and The Beautiful Monument in Adelaide, Nautical Mile in Perth, Young Lions in Brisbane and Between You & Me in Melbourne.

Hellions have today launched a Fan T-Shirt Design Competition, giving punters a chance to show off their creative flare for a cause. Not only will the best design concept receive their dream Hellions tour t-shirt and payment for the design, they will also win two tickets to the Hellions gig of their choice.

The winning tee will be made available at shows nationwide, with all profits going to Girls Rock! Australia, a national network of organisations which empowers female, trans, and non-binary youth through music education and mentorship. Through the medium of music, Girls Rock! Australia inspires confidence, encourages creativity, celebrates individuality, and ensures opportunity for young people.

So, what are you waiting for? Get creative and submit your design via Instagram or Facebook. Don’t forget to tag @hellionsmusic, #HellionsTourTee and #GirlsRockAustralia to be in the running. The competition ends on Wednesday 3 April with the winner to be announced via Hellions social media pages on Friday 5 April. For more information head to Hellions Facebook or Instagram.