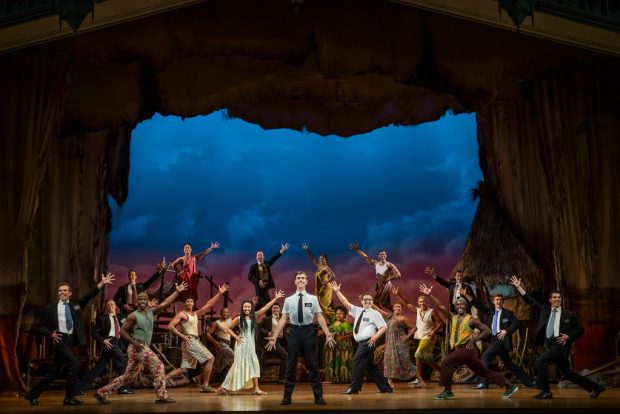 Eventalaide would like to thank the Adelaide festival centre for the invitation to one of the greatest musicals of all times, The Book of Mormon.

This Broadway musical first hit the stage in 2011 and it was written by Matt Stone and Trey Parker (the creators of South Park). It has received 9 Tony awards and it highly recommend.

Saturday June 29th was opening night and the anticipation of this performance was felt.  We had heard amazing reviews and were about to witness the perfection of The Book of Mormon.

We had great seats which were centre of stage and waited for the fun to begin.  The musical is about missionaries that must preach The Book of Mormon to the world.

The set and stage lighting were perfect and the cast were amazing.  The laughter commenced  swiftly, the songs were fun and witty.  The actors played their roles exceptionally well and they voices were amazing,

This musical reaches your heart and soul and you cannot wait for the next scene.  SouthPark fans will absolutely love the comedy used, as my associate could not contain his laughter.

There will be people who do not fully comprehend the jokes or kendo but the majority will remember this performance for its ability to keep you smiling.

The show went for 2.5 hours with a 15 min interval.  We could not wait to see the final stages of the show and laughing even harder than ever.

I do not want to go into too much detail as it’s element of surprise and wit is what makes it amazing.

I highly recommend this musical, the standing ovation was well deserved to the extremely talented actors.  Their energy, enthusiasm, and perfect portrayal of their characters needs to be congratulated.

I give this musical 9/10 as some people will find this humour not too their liking, but the majority will leave smiling  with gratitude in witnessing this multi Tony Award show.