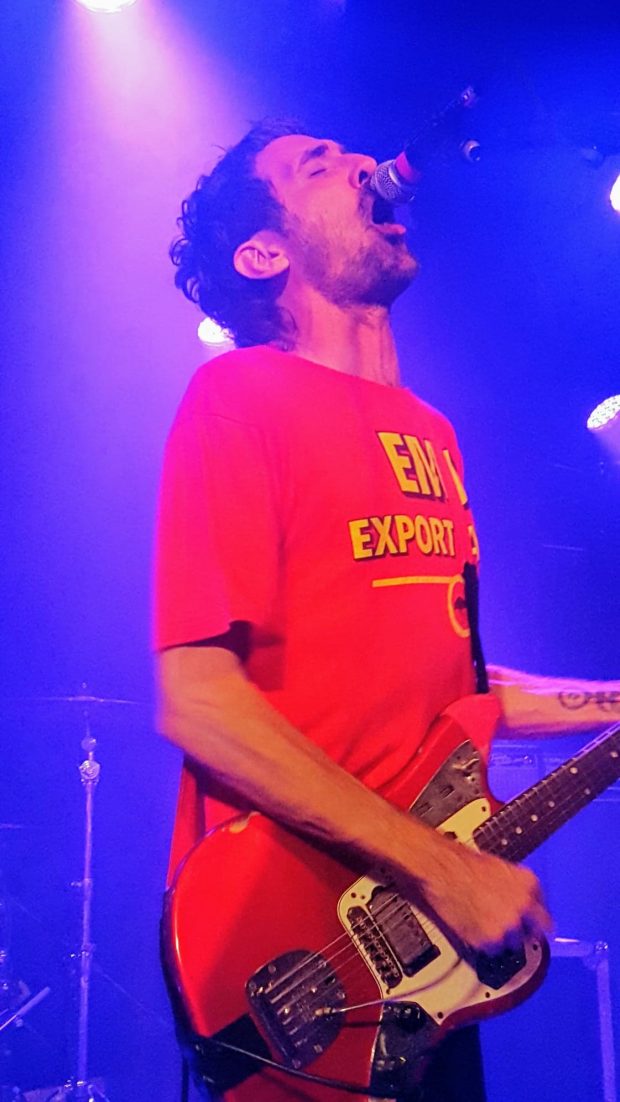 Following an awkward although endearing attempt at a Welcome to Country

Tasmanian three-piece All the Weathers start their set with their theme song and won over the audience immediately. Borders is a song about Bordertown and before they play it, they regale us with a tale of a previous stopover at Bordertown and having to keep their glow-in-the-dark records in the fridge. Exchanging instruments, Callum Cusick, Georgia Lucy and Gigi Lynn all play front person as some point. Their set is one of dynamic chaos and angry pounding, at times employing a post punk bass technique and infrequent time changes. The energetic end to their set includes attempting to play guitar with a drink umbrella and cartwheeling over the guitar laid on the stage. Let’s hope the audience aren’t already spent just during the first support.

“We’re from New York”, proclaims missing toothed, mulletted, underdressed (boxers and bikini top with flame socks) singer Dani Miller. With no disrespect intended to the musicians in the band, but they all appear to have been around the block and you could imagine them having met in a jail cell after a bar fight. Drummer Sean Powell’s tattoos and metal grin invite further thought that he may have experienced an even longer incarceration. By their third song A Fucker Like You they have incited a mosh and Dani jumps onto the dancefloor and to join the audience, breaking down the invisible barrier between performer and audience, giving a preview of that barrier being totally removed during the Tropical Fuck Storm set to follow. Fist punching an enthusiastic member of the audience down front between songs, she calls out, “One day I was in Adelaide… and where was all my shit?” as a lead in to Hippie Vomit Inhaler and I am reminded of Amyl and the Sniffers, having seen them play recently at the Crown and Anchor.

Awaiting the arrival of Tropical Fuck Storm between sets, I note the slippery dance floor from drinks spilt during the supports and consider this uncomfortably humid evening as the perfect environment for the style of mutant funk to follow (and I do note the other definition of the word to mean smelly and earthy).

Coming out and singing along to intro music of a live version of Cold Chisel’s Saturday Night, Tropical Fuck Storm begin with a barrage of guitar noise song (Lost Animal cover Lose The Baby) that could be at any point in their set. A couple of songs in, Gareth announces, Hey Radelaide, it’s Saturday night” and he puts a finger to his lips to silently motion “shhh”. There’s a response from the audience that it’s a school night and it may very well be but with a name like theirs, adult content is implied and considering in retrospect what eventuates later in the set I am hoping there are no kids here tonight.

In the middle of the set, they play Braindrops out from a drawn out drone sequence sounding like the Doors The End and You Let my Tyres Down incites a push to the front and a mosh. Gareth plays guitar like he’s wringing out of a washcloth and swinging his guitar like a trick yo-yo, the headstock only missing the front row as they duck away, while on their version of the Divinyls Back To The Wall, Gareth produces a feedback squeal like a kettle whistle.

Towards the end of their set, there is a sequence of events beginning with Gareth asking a fan to throw their shirt to him, which he takes to his bandmates to sniff as an “experiment” (Lauren refuses). This leads to Gareth calling it “ladies night at the Gov” and invites men to join them onstage to strip, resulting in a stage invasion before they play their last song. Although most were topless, one over eager man took it too far by completely stripping. It was bad enough that he couldn’t keep it in his pants (so to speak), and his behaviour came close to sexual assault as he attempted to simulate cunnilingus on Georgia from All the Weathers as she was lifted surfboard style by the males. To see someone rock out with their cock out was not something I had expected earlier. Afterwards, the band leave and the stage-invaders that Gareth has named the Tropical Fuck Storm Troopers are ordered repeatedly, “If you are on the stage, leave the stage” until the stage has been cleared.

Returning to a stage that now seems empty, Lauren responds to the previous chaos with, “Calm down it’s a school night. That was the worst strip tease I have ever seen” before the band play their final couple of songs to an audience re-energised for the final stretch. After the band leave the stage again, Gareth is left alone to twiddle some knobs on an amplifier, drawing out the droning feedback. In closing, he looks out into the audience and says, “See you next time. Bring your mum. Bring your dad. I want to meet your dad” before walking off stage and letting the feedback fade out and the crowd disperse to the bar or elsewhere resigned that the night is complete.