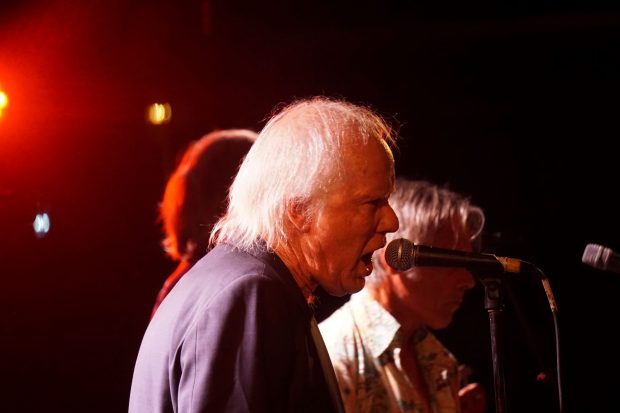 Two bands with a history of only releasing one album before they disbanded. Radio Birdman broke up in 1978, having only released the Radio Appears LP in 1977. The Stems broke up in 1987 having released their only LP, At First Sight, Violets are Blue that year. Both bands have reunited several times and released new material later, The Stems, Heads Up album in 2007 and Radio Birdman’s second LP Living Eye released in 1981 and Zeno Beach in 2006.

The Stems, founded by Dom Mariani (vocals & guitar) in 1983 hail from Perth, Western Australia. Since 2003 there have been several reunions and are currently riding on the new level of interest following the re-release of 2007’s Heads Up album on CD and for the first time, on vinyl. The band these days consist of Dom on guitar, vocals, original member Julian Matthews on bass, David Shaw on drums (since 1986) and now Ash Naylor (Even, Paul Kelly) helping out on guitar and vocals. The sound is power pop with a surf tinge to it.

One cannot help wonder if The Stems would have been more famous if they were around in the 60’s? But then we wouldn’t be getting to hear them play today so I guess we are the winners. This time round they have a “new, old” album to promote with their 2007 album Heads Up being re-released on CD and more importantly on vinyl.

This evening we get a good mix of tracks from both albums and a few singles thrown in for good measure. Ash Naylor fits in beautifully and while there may have been a few Ash fans in the audience (me!), there were probably quite a few people asking who is that guy. But this isn’t about Ash as this is a true band effort.

They start the set with She Sees Everything from afore mentioned Heads Up album and it is a joy to hear Dom’s wonderful voice again. Just aint Enough was a relic from their debut EP and a wonderful to hear live. Jumping to Conclusions from the EP was also played, just confirming how good the band have been right from the beginning.

Ash got a lead vocal on The Byrds song I’ll Feel a Whole Lot Better and with its trade mark jangly guitar fitted right in with the rest of the set. Misery, Undying Love, At First Sight amongst others got an airing and the set finished with a superb Make You Mine. This 1987single morphed into some blues with Baby, Please Don’t Go before reverting to the wild Make You Mine.

Hey Dom, how about bringing Datura 4 to Adelaide?

In 2014 Radio Birdman reformed to promote a new Box Set of remasters of the band’s official releases as well as a wealth of unheard archived studio tracks and live sets. The band have continued with the same line up to this day, constantly touring Australia and Europe. Original members Rob Younger, keyboardist Pip Hoyle and guitarist Deniz Tek are still in the band along with Nik Rieth on drums, Jim Dickson on bass and Dave Kettley on guitar.

Radio Birdman may well have been the true original punks. They started well before The Sex Pistols and at the same time as The Ramones. They were influenced by Detroit bands of the late ‘60’s, such as MC5 and The Stooges.  With a constant line up for the past 5 years, the band has become tight and getting better all the time. This was demonstrated right from the beginning with the first song having the appropriate title We’ve Come so Far (to be here today) from their third album Zeno Beach.

Rob doesn’t talk much between songs, just a few whispered “thanks” and a few high fives with the audience in front of him. The band have been around long enough to know what the audience want. The set was made up of songs from their 3 albums and E. P’s. Smith and Wesson Blues came next and this dates back to their first E.P (and also turned up on the second album Living Eyes). But when they launched into Do the Pop, the slightly older crowd in front of the stage obliged by doing just that, pogoing and jumping madly. The smooth sounds of Man with Golden Helmet impressed and stood out, maybe because it is so different to what they play for the rest of the night.

The final Aloha Steve and Danny raised the sound to new levels and New Race was the natural stunning conclusion with all arms raised and everyone singing “Yeah Hup Yeah Hup”.

The Stooges, Search and Destroy kicked off the 4-cover-song encore. Next up was Blue Oyster Cults, Dominance and Submission, from which the title of the album Radios Appear came from. (Checkout the lyrics). A furious version of 13th Floor Elevators, Your Gonna Miss Me followed. Yes Rob, we certainly are going to miss you when it is all over. MC5’s Kick Out The Jams bought the night to an apocalyptic finale.