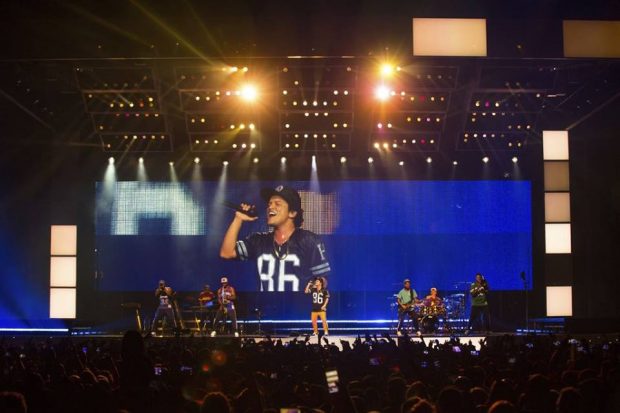 It’s a wintery post-Fringe Monday evening in Adelaide, and you’d be forgiven for thinking people would be staying home tonight. Fortunately for Bruno Mars, his 24K Magic Tour is completely sold out, and the line to get in snakes all the way around the Entertainment Centre an hour after doors have opened. It’s a testing time for Dua Lipa fans, with the hugely anticipated support act due to start any minute.

Dua Lipa is arguably one the biggest rising pop star on the planet at the moment and she absolutely proved why tonight. Fronting a tight knit 3 piece band, Lipa plowed through her multitude of hit singles from her debut self-titled album, opening with the smash hit Hotter Than Hell straight out the gate. Lipa’s voice is heavy and soulful and she somehow manages to make it look effortless as she bounces back and forth across the stage in huge white sneaker platforms. Lost In Your Light thankfully didn’t suffer without the appearance of Miguel, and Be The One was the perfect warm up sing-along track for the Bruno Mars fan-heavy crowd. Dua Lipa shines through the slower ballads like Garden and Begging, but it’s when the band starts playing Blow Your Mind (Mwah) that the crowd finally give Lipa the energy she deserves. IDGAF entices a huge cheer and closer New Rules is the perfect ending to a whirlwind support slot. The beauty is that Lipa still had at least five smash singles she could have played tonight, she just didn’t have the time. Dua Lipa perhaps hasn’t reached stadium-popstar status just yet, but all of her hooks and melodies scream otherwise and she is certainly well on her way. With such a brilliant backing band behind her, Lipa’s show was a refreshing throwback to classic pop acts that started small and took over the world.

As a velvet curtain adorned by the Mars crown jewels enveloped the stage, the lights soon dropped and the crowd roused by a NKOTB-inspired video introduction. Grammy-award winning Bruno Mars and his band grace the lit up Tetris block stage wearing matching NBA guernseys and open with Finesse. There’s no doubting the professionalism of this production – Mars and his band are a well-oiled machine and profusely talented, never missing a beat as they slide in sync across the stage, working the crowd at every angle and toe-tapping their Nikes in unison. 24K Magic is a surprise so early in the set, but it goes to show how many hit songs Mars has to back him up. Mars’ vocals are flawless throughout, perhaps slightly diminished by the shockingly loud pyrotechnics. By this stage the entire arena is on their feet and Treasure induces the first of many massive sing-alongs. Bruno Mars is the ultimate of multi-talented performers, rapping, singing, dancing and even picking up the guitar at one point to shred a solo even Slash would be jealous of. He is reminiscent of Prince and you can’t help but see the similarities them. Add a dash of Michael Jackson and you’ve got Mars, who is doing his own version of the Moon Walk through the centre of the stage. Mars shouts out to southern suburb Hackham in the middle of Calling All My Lovelies (who told him?) and then to the ladies in short shorts with Chunky.

Mars lets his band members show off during portions of the set, and I’m grateful – it’s rare to see musicians of this calibre all up on the same stage. Marry You has the crowd waving their phone torches and heaving as Mars kicks it up yet another notch with the heavy riff-driven Runaway Baby.

Mars’ vocal capability is at its best when he gives the band a break and performs When I Was Your Man with just a piano backing. As he soars through the final notes, the crowd is absolutely lapping it up and continues to as he makes his way through Locked Out Of Heaven and closes the set with Just The Way You Are. The curtains drop and raise again not a minute later (encores, why do we still bother?) as Mars and his band finish it off with an epic version of Uptown Funk.

It’s not often such a huge and stylish production makes its way to Adelaide, and as someone who tends to shy away from commercial pop, this was one hell of an impressive show. Bruno Mars certainly proved tonight why he is one of the most successful artists of this generation and will continue to be as long as he is creating music.