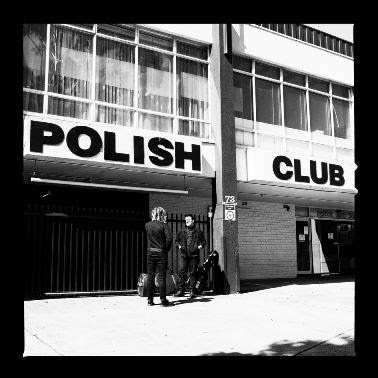 OK, let’s do this. “Where U Been?” slams in hard and fully loaded, like the drummer can’t be arsed waiting for the needle to drop. “Uhuh, yeah, OK,” the singer grunts. His guitar rips in like a blunt circular saw.

By the time the runaway car sideswipes a train in the first hip-hammering chorus, it’s compelling to wonder whether Polish Club might have just made the most blistering rock’n’roll debut of the year.

“I think our strength is in the limitations of the two-piece band,” says the aforementioned drummer, John-Henry. “When you’ve only got guitar and drums, you can’t just… play. You’ve got to give more. Physically.”

As the blood on his knuckles attests, that’s the way it goes when he and singer-guitarist Novak hit the decks. That’s both on stage, where they’ve left a simmering throng of new fans dripping and spent, and on the handful of singles that have kicked a series of holes in polite company since “Able” and “Beeping” announced a roll-up garage revolution in late ’15.

ALRIGHT ALREADY is the culmination of all of that, a Stax-meets-Stooges slab of highly combustible bunker-soul tunes recorded in eight days in Leichhardt’s Linear Studios, with Wolf & Cub’s Wade Keighran keeping his head down as sparks flew over the mixing desk.

The result — the savage swing of vintage rock’n’roll colliding with the pleading pitch of classic, gravel-gargling soul — was “just about playing to the strength of the people involved,” John-Henry shrugs.

“We play hard and fast and loud with kinda simple guitar lines, and Novak has a voice that manages to push a lot of air. We probably sound so big because his voice is actually physically very loud. Like, if he sings without a mic in a room, you can’t talk to the person next to you.”

Like you’d even want to when he slides into the hyperventilating rush of the album’s second single, “Come Party”, or hits the machine-gun hip-shake tempo of “Shark Attack!” like Elvis’s hard-living brother exhumed for exactly one minute and forty seconds. Regardless of the minimal tools involved, the energy throughout simply defies belief, testimony to a chemistry that’s maybe one part plan and nine parts feeling. Yes, for those with a literal bent, there is a Polish connection buried in there. But the Club is better understood in terms of explosion than exposition.