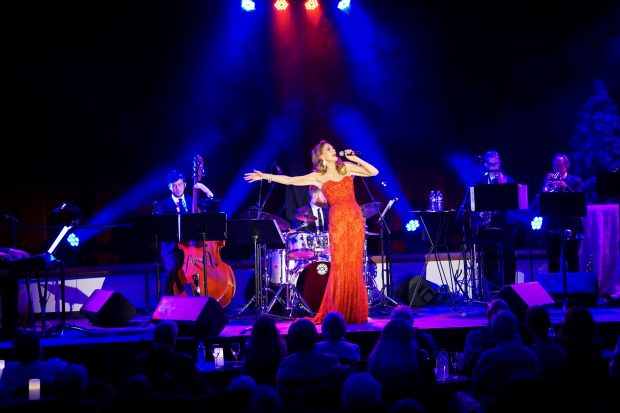 Santa rolled into town last Saturday in the annual Christmas Pageant so I guess it is time to roll out the Christmas shows and where better to start than with Rhonda Burchmore and The Jack Earle Big Band. This sure was a Red-Hot Swingin’ Christmas at the Regal Theatre thanks to promoter Markus Hamence.

Rhonda and band have a new Christmas album out via ABC Music and they were obviously keen to spread the early Christmas cheer all around the Regal Theatre. Rhonda is no “new comer” to singing Christmas songs, having been at many Carols by Candlelight shows over the years all around Australia.

Jack Earle and his six piece Big Band strolled on stage, picked up their instruments and gave us a Big Band rendition of Santa Claus is Coming to Town before introducing Rhonda Burchmore. Rhonda walked on stage in a stunning red dress and immediately launched into We Need a Little Christmas, following it with Cool Yule, the opening two tracks from her new Christmas album.

“Who remembers the band Slade?” she asked after singing the Slade hit, Merry Christmas Everybody and judging the average age of the people in attendance, I am guessing almost everyone. However, the song was not done in the style of Slade, but rather Jack Earle’s Big Band’s version, breathing new life into the song.

The band played Frosty the Snowman while Rhonda made exit, stage right, to “slip into something not as tight” as she told us, returning in a long silver dress that did in fact look “as tight”.

In the lead up to interval we got Most Wonderful Time of the Year, Let it Snow, complete with a story of Rhonda’s Christmas in Prague, before finishing with Man in the Bag.

The second half gave us more of the same. Wonderful interpretations of classic Christmas songs, stories of her (and Jack’s) life and some really bad jokes along the way. Rhonda sang It’s Beginning to Look a Lot Like Christmas, The Christmas Song (Chestnuts Roasting on the Open Fire), before a stunning interpretation of The Christmas Blues, done in a style of a New Orleans funeral march.

Another costume change after Merry Christmas Baby gave Jack to chance to introduce the band members. Rhonda came back on stage in a little Ms Santa outfit, with a Christmas present for Jack, which turned out to be a trumpet and he gave Rhonda a present in a big hand muff. “I like my muff” smiled Rhonda, giving a mischievous grin to the audience. It’s Cold Outside featured Jack on trumpet and then still smiling the band played Let’s Cosy Up (Put Your Hands in my Muff) cheekily.

I’ll Be Home for Christmas with only Jack on piano was compellingly beautiful and with a haunting brass intro of Auld Lang Syne, What Are You doing New Years Eve sounded equally as beautiful.

Have Yourself a Merry Christmas closed out the evening with Rhonda telling us they would be in the foyer straight after to sign CD’s, talk to people and have selfies taken. A wonderful gesture.

The timeless Christmas tunes we know and love so much took on a new turn this evening. Jack Earle certainly had raised the level in reimaging the everlasting songs. The musicianship was of world standard and Rhonda’s voice was outstanding. The Christmas stories were good, especially the story of family Christmas days of old, of finding a threepence in your pudding etc. Maybe a little work is needed on some of the jokes though.

It may have been a cool and damp evening outside, but the music was hot inside the Regal Theatre.