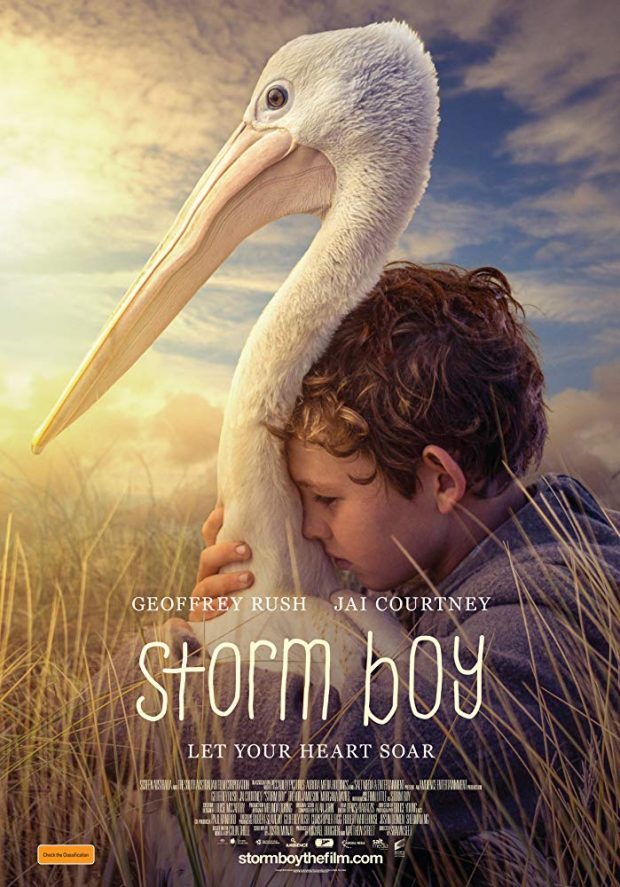 Having been many years since I saw the original Storm Boy, I watched it the day before attending the premiere and realised what a classic Australian movie it is. I was sceptical about the remake but definitely was not disappointed. Adelaide was appropriately selected for the Australian premiere and included brief presentations from director Shawn Seet and actors Erik Thompson, Trevor Jamieson and Finn Little.

The movie is a beautiful and contemporary retelling of Colin Thiele’s classic Australian tale. ‘Storm Boy’ has grown up to be Michael Kingley, a successful retired businessman and grandfather. He returns to Adelaide for a Board meeting with his company, now run by his son Malcolm Downer (Erik Thompson – Packed To The Rafters, 800 Words).

When Kingley (superbly played – as always! – by Geoffrey Rush) starts to see images from his past that he can’t explain, he is forced to remember his long-forgotten childhood, growing up on the Coorong with his father. He recounts to his teenage grand-daughter, Madeline (Morgana Davies – The Hunter, The Tree) the story of how, as a boy, he rescued and raised an extraordinary orphaned pelican, Mr Percival.

The movie regularly switches between current day with Maddy and Michael bonding and his childhood where he is “christened” Storm Boy by local aboriginal Fingerbone Bill (Trevor Jamieson – Around The Block, Rabbit-Proof Fence). In the original movie this role was played by David Gulpilil, who makes a brief cameo role as Fingerbone’s father in the remake.

Finn Little plays the young Mike ‘Storm Boy’ Kingley brilliantly and is definitely a young actor to keep an eye out for. His relationship with the pelicans and Fingerbone is quite moving. It is his up-and-down relationship with recluse father, ‘Hideaway’ Tom (Jai Courtney – Suicide Squad, Divergent, Terminator Genisys) that provides insight into Mike’s subsequent attitude to his life and the feelings he portrays to his grand-daughter.

It is superbly filmed with some sensational landscape and certainly does justice to this classic story. There are some changes to the original story-line but they do not detract from this high-quality production. I am not sure which version of the Storm Boy story I like better – some aspects of the original I preferred but the new version also appealed. However, reviewing the 2019 version purely on its own merits, it is a great movie and one not to be missed.