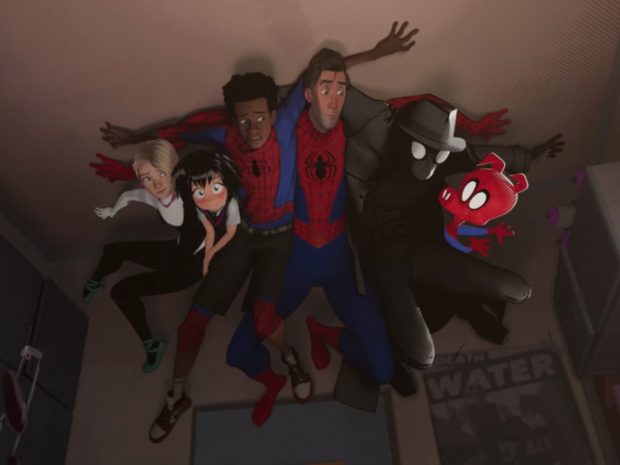 Spider-Man – Into the Spider-Verse Review

Spider-Man – Into the Spider-Verse

In the Spider-Verse is the first of a new collaboration between Marvel and Sony, since the recent return home of Spider-Man to the Marvel stable.

I must admit, when I saw the words ‘Spider-verse’ I thought I was going to be lost in all the complexities that come from different comic writers picking up a character an reimagining its place in slightly different storylines – but fear not, this is a movie from familiar Spider-Man territory.  It’s also squarely pitched in the PG zone, so I took my trusty 8 ½ year old professional review buddies Lily (favourite movie: Night at the Museum; favourite Superhero: Groot) and Zak (favourite movie: Avengers: Infinity War; favourite Superhero: Hulk) to gauge how it went down with its target audience.

It’s a classic tale of boy meets spider, spider bites boy, and boy becomes Spider-Man – but it’s not Peter Parker as you’d expect. The original Peter Parker Spider-Man (spoiler alert) dies early in the movie, and it’s up to this new urban Spider-Man to find his feet and become a hero.

The Story centres on Miles Morales, an intellectually talented, popular Brooklyn kid who finds himself unfamiliarly outcast when he starts at a new school to which he’s earned a scholarship. Struggling to find his place, he spends a lot of time with his uncle Aaron with whom he shares an interest in street art. After being bitten by a radioactive spider on one of these adventures, Miles starts to develop all the classic hallmarks of spider-skills such as sticking to things with his hands and he struggles to contend with his new powers. He stumbles across the original Spider-Man’s final battle with Green Goblin and Kingpin, and is tasked to take the mantle and prevent Kingpin’s plot to permanently open a multidimensional portal which threatens to destroy the Brooklyn that he knows.

Fortunately, several other spider-folks (The hilarious Noir Spider-Man, Dishevelled Spider-Man Peter B. Parker, Japanese Peni Parker and Spider-Ham the Pig) have crossed into Miles’ dimension, and together they help to show Miles how he too can be a hero, save the dimensions, and to help them all return home.

The animation is super stylish and looks like a live action comic book, and the humour had the kids laughing throughout the cinema. Good to see that the kids were also glued to their seats, despite the two hour running time.

Spider-Man, Into the Spider-Verse is definitely one worth watching as it’s a quality production, and is particularly engaging once the many spider-types invade Miles’ world.