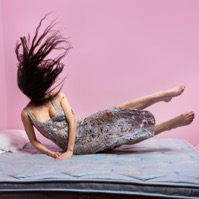 A queer, femme adventure of failed heroism and triumphant femininity.

A dangerous quest of literary theft, build-your-own identity and post-anarchy. A moving and sensational experience of queer thinking, failed heroism and triumphant femininity.

Don Quixote is the softcore idol you deserve, and has a S.A. premiere at the RCC Fringe season.

Queer Femme Kerith Manderson-Galvin (186,000, The Eternity of the World) rips off the world’s first modern novel, Barbie™, and the original rip-off artist Kathy Acker et al. in a signature work that has alienated and captivated audiences across Australia – and invites you into a world which was all an impossible dream.

Turning the page on our construction of gendered identities Being Dead (Don Quixote) pulls femininity from the body and lets it loose on a fantasy set: a digital peep-show booth, a little girl’s room, and a Barbie doll’s packaging.

MKA is one of the leading new writing and theatre companies in Australia. Since 2010 the company – credited with starting a writers’ renaissance – has produced the experimental and critically acclaimed work of over 100 writers, across Australia, and internationally.

Being Dead (Don Quixote) is created and plagiarised and performed by Kerith Manderson-Galvin. The production is accompanied by the composition of jazz luminary Jules Pascoe (JAZZPARTY, Husky, On Diamond).

Kerith Manderson-Galvin is a Melbourne based performance maker who creates unconventional works of theatre, live art and performance art.  Kerith’s work appears in galleries, theatres, gigs, online and at music and arts festivals and they have performed across Australia at venues and events including Dark Mofo, Mecha: Festival of Experimental Art, PICA, MTC (Neon), and Provocare Festival. They make performance concerned with queer femininity, a feminine aesthetic, the marrying of high and low culture, and feelings.